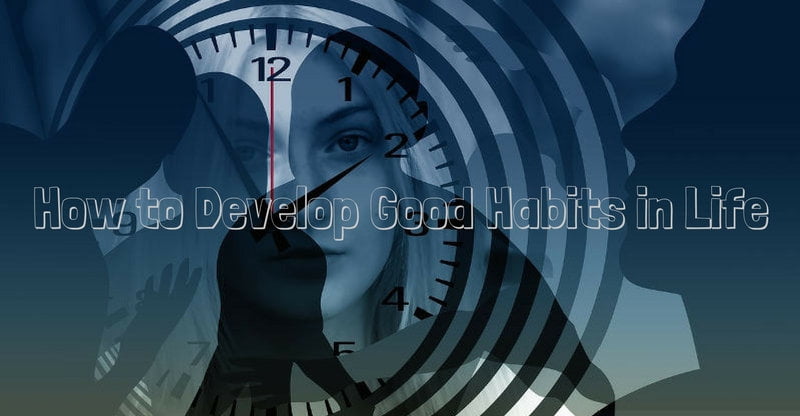 We all have our little habits, good and bad and sometimes we don’t even realize we have them. The bad ones can be extremely annoying to those around us, while we’re completely unaware of them. We’re not alone with our bad ones of course, but perhaps we should all consider how to develop good habits in life and rid ourselves of those bad ones.

Perhaps the first thing is to make a list of good habits and bad habits. We may not know our own, but are almost certainly aware of those of others. Those little annoying ones such as tapping fingers on something or when someone keeps finishing your sentences for you, aren’t really what we should concern our self with. They may drive us nuts but in the grand scheme of things, are not particularly life changing.

A habit is formed by repeating an action or behavior until it begins to happen automatically. Because we function with certain behavioral patterns as humans, it isn’t easy to form new or break old ones. So, you can see once a new habit is formed, it isn’t easy to change it. Which of yours are holding you back in life? Do you have a habit of quitting at the first hurdle or failing to stand up for yourself? Rather than trying to stop these, might it be better to develop new, good habits to improve our life?

How are Habits Formed?

As already mentioned, repetition plays a major part of how habits are formed. According to Charles Duhigg in his book The Power of Habit, it’s a three-step process in a “habit loop”. First, there’s the cue, which triggers the action. This is followed by the routine, which is the actual behavior, then lastly the reward, which helps your brain to remember the loop without you having to think about it.

Once a habit is formed, it can occur without the brain being particularly involved at all. The habit loop becomes a part of us. Do you have the same routine every day, or do you get accused of being set in your ways? I’ve been called a creature of habit many times, although I dispute it! The reality is, that routine can feel very comfortable. We do the same things in the same way, day in and day out, no wonder habit formation can rule our lives.

Repeating the same behavior over time will imprint upon your subconscious mind so it becomes a part of you. It’s thought this happens in around 30 – 90 days, with the average being 66 days. This comes from a study published in the European Journal of Social Psychology in which Phillipa Lally looked at 96 people over 12 weeks. Each of them had to choose a new habit. Although the average was 66 days, the results showed it took longer than two months and could range from anywhere between 18 and 254 days.

How to Develop Good Habits in Life that Benefit You

We’re not talking New Year’s resolutions here, the ones you start and forget about after a few days. What we are talking about, is how to develop good habits in life that will help cancel out or stop bad ones forming. Say, for example, you always see situations in a negative way, always taking a pessimistic view. The new habit goal would be to develop an optimistic persona and therefore stop the negativity. Firstly though, can you find a reason why you usually take a negative view? Did you learn it from someone in your early years?

If you’re able to pinpoint where it comes from, it will make it easier to create new habits that stick. Creating good habits isn’t easy, but setting a goal is the right place to start. Monitor your thoughts, because any negative words you utter will come from them and your beliefs.

If you can stop the negative thought, you can probably alter the words too. Now, given we have around 70,000 thoughts a day, we can’t monitor all of them, so don’t feel bad when you have some failures. The point is, to start regularly catching as many as possible and turning them positive and you’ll be creating a new pattern and eventually a habit.

Your plan can be broken down into smaller achievable goals which are easier to focus on. In most cases, you can’t just change. It doesn’t happen that way, unless you’re presented with a do or die situation. Don’t use the “I’ll change when I get…” excuse, because that’s just your mind tricking you to stay in your snug little comfort zone.

You must commit to yourself and have a clear intention, then stick to it. If you want to get fit, don’t just join a gym or you risk becoming one of the many people who pay each month but don’t attend. Instead, do something such as arranging with a friend to regularly meet and workout together at a certain time and day.

The first hurdle is getting started, but once you commit and get going, it’s a big step. The problem starts when you let up or forget about keeping a check on your new behavior. You’ll need an amount of self-discipline because it can get difficult and feel pointless when you’re not seeing any results. Maybe adjust your daily routine to disrupt your normal flow. I did this when I was thinking how to develop a habit of waking early.

No mater what time I went to bed, each night I set my alarm for 5.30am and when it sounded, rather than set it to snooze, I threw back my duvet. This made me get up at the same time every day and even if I felt tired, I still got out of bed. It’s now a habit for me to get up at 5.30am every day.

I did this because getting up a couple of hours earlier makes my day longer, I can get more done and find I’m not rushing around and getting stressed. Early morning in summer time when the days are longer is a real bonus too. We all develop patterns in our life and if we can form negative ones, it shouldn’t be difficult to form positive ones.

Making changes like this won’t always go smoothly, of course there will be some setbacks and failures. Accept them, they’re not worth getting upset about. They can be a gauge to show the progress you’ve made. Keeping a journal of your progress can also help because putting your journey onto paper, makes it real and therefore, important. Make sure you celebrate any small wins because they are real achievements.

Commitment Doesn’t Need to be Difficult

You know how to form new habits, create an environment for good habit formation. If you’re surrounded by people who don’t support your new thinking, maybe it’s time to change those you associate with. When we make a change, some people will naturally fall by the wayside, but there will be others who come into your life, who are more aligned to the new you.

Work on creating a healthy mindset, before developing habits. If your mindset is aligned to what you want, you’ll find that daily habits to improve life will come much easier. You can create your own version of the “habit loop” mentioned earlier. Rather than it being something you don’t want to do, make it something you do want to do.

Repetition and monitoring your progress without being hard on yourself is how to develop good habits in life. When it’s happening without you even realizing it, is when it has become a natural part of you and you won’t even think about it or notice it!